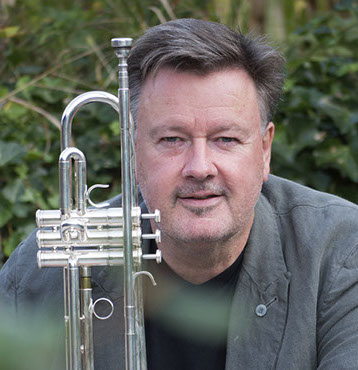 ROB BRUYNEN, born in the South of The Netherlands, discovered around his 14th, the creative possibilities of the trumpet and began his career in local jazz groups and big bands. Already during his studies at the Conservatory in Hilversum, where he did the classical and jazz training, he was asked as lead and solo trumpeter and played with many broadcasting and jazz orchestras like The Skymasters, Vara's Dance Orchestra, Jazz Orchestra, The Dutch Metropole Orchestra and others.

Since 1985, Rob is a trumpetplayer in the world renowned WDR Big Band Cologne winner of 3 Grammy Awards and several nominations. Started as a lead player and that for years he now takes the position of 2nd trumpet and jazz soloist.

The list of guest musicians with whom he could work in these WDR productions is endless.

In his long career Rob's trumpet sound is to hear on hundreds of radio and television productions and on more than 70 CDs.

His composing and arranging led in 2010 to the cd ‘SPACE FOR ALL ‘ with its fresh band BROWNIES COLOURS.

Very recently in 2016 his latest CD ROB BRUYNEN ' ONE DAY ' came out and is now available.

He conducted his own big band ' BROWNIE SPEAKS ' a Euregional Bigband with musicians from The Netherlands, Belgium and Germany, with which he recorded the cd ' FIRST ' in 1998.

He writes projects for big band including recently Steely Dan’s music that in the near future will appear on cd.

Having worked for more than 40 years as all-round trumpet player/musician, freedom, creativity and spirituality in music has become increasingly important. This is mainly reflected in my compositions and fun playing with friend musicians. Being creative with music! Other styles of music have become a challenge and inspiration, such as old-classical and ethnic styles. My mantra: Remain curious about all that you don't know; in life and in music!